All kinds of healthcare moves - by Google, in AI, about sickle-cell - and the struggle to make equitable progress in healthcare.

Utah’s [online debt dispute resolution] system [for small claims court] is not easy to navigate. Todd [Feathers, reporter at The Markup,] interviewed Utah resident Samantha Thompson, who didn’t notice the case-sensitive, 55-character web address for the online dispute resolution system that was on the third page of a five-page printed mailing she received.

Researchers at the University of Arizona who studied Utah’s system found that it took users nearly two minutes to type in the URL and that more than one-third of users attempted to enter it correctly more than three times. They recommended creating a shorter URL and QR code that users can scan, as well as putting the links on the first page of the mailing.

Payer contracts, physician pay still anchored in fee-for-service. The healthcare industry has made some strides in the “journey to value” across the last decade, but in reality, most health systems and physician groups are still very much entrenched in fee-for-service incentives. While many health plans report that significant portions of their contract dollars are tied to cost and quality performance, what plans refer to as “value” isn’t necessarily “risk-based.” 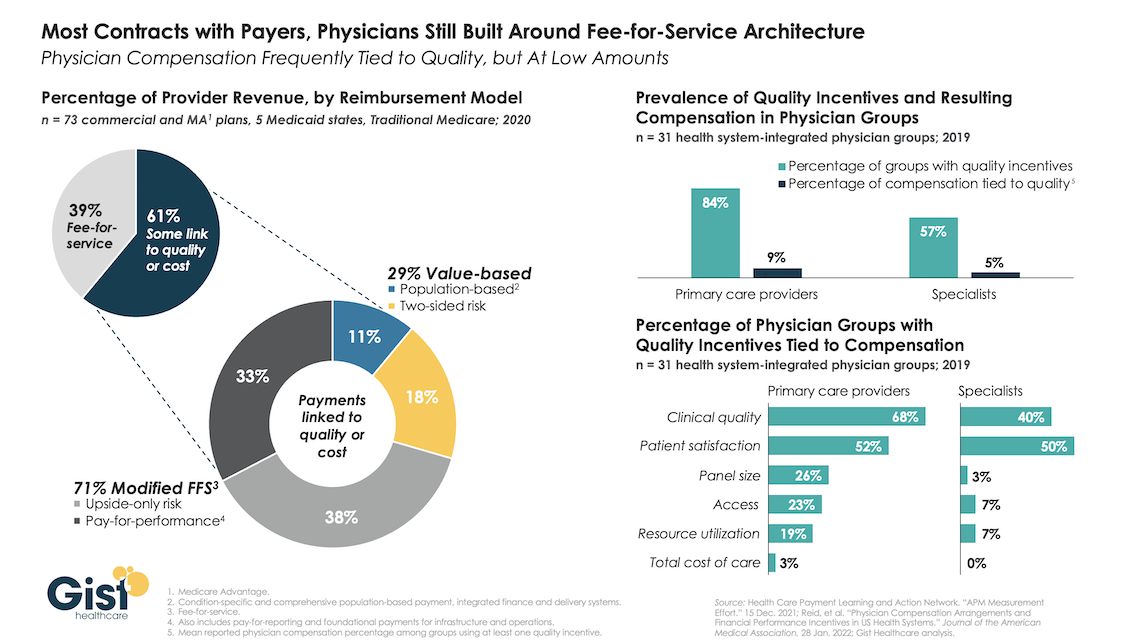 In other words, it isn’t that Amwell is the future, it’s that health systems are failing to adapt to a world with a new commodity product—consumer-friendly telehealth—allowing other models to rise in the place of health systems. And that might be disruption.

Mario Aguilar, STAT. Google leans into search as it looks to get health efforts back on track (March 24, 2022)

Google announced a new search engine feature that will show available appointments for participating medical practices, not unlike how users can check movie times and dinner reservations directly from a business profile in search. The new feature plays to Google’s strengths in search, as the company works to bolster its health efforts following an embarrassing reshuffle last year...

When it launches in coming weeks, the feature will show appointments for CVS MinuteClinics, and Google is partnering with third-party scheduling tools Kyruus and Stericycle Communications Solutions, which providers can use to pipe their availability into the search engine. Experts told STAT that the feature — which will be free for providers to take part in — has the potential to help match patients to physicians more efficiently, but also caution that even something as seemingly simple as an appointment booking service can be challenging in a complex health care system.

Kayla Benjamin, Washingtonian. This App Lets You Rent a Backyard for Your Dog (March 14, 2022)

Founder David Adams started SniffSpot four years ago. Living in downtown Seattle after adopting his first dog, he saw a need for city dwellers to access private green spaces for their animals. “She really wasn’t getting the exercise she needed; she’s a lab/pit mix—very high energy,” he says. “Dogs literally are evolved to be on the move all day in the wild, using their nose in a free environment. And she just couldn’t get that living in the city.”

After posting about it online and getting more than 1,000 responses, Adams set up a makeshift website. Within a month, more than a dozen guests had been connected with hosts in the Seattle area who had listed their yards for rent.

“The question of trust and mistrust is going to be one of the most important issues with these new gene therapies,” Carolyn Roberts, a historian of science and medicine at Yale, told me. “It’s such a new treatment, such an involved and invasive treatment.”

Roberts believes that building trust in gene therapies will require doing so for the medical system more broadly. This, in turn, will require changes in how health-care providers approach their daily work. “One of the challenges is that, when there’s already a culture of mistrust in a group of people, any negative event is magnified and further supports their preëxisting belief and embeds it more deeply,” Roberts said. “But a number of repeated, small positive interactions can start to bring some of the walls down. I mean basic things, like making eye contact, shaking hands, smiling, speaking in a compassionate tone—little things that show a basic level of respect.”

Casey Ross, STAT. How a team effort to improve health care with the help of AI paid off (March 22, 2022)

It took three years to embed AI models to flag lung and adrenal nodules into clinical practice, requiring thousands of work hours by employees who spanned the organization — from radiologists, to human resources specialists, to nurses, primary care doctors, and IT experts. Developing accurate models was the least of their problems. The real challenge was building trust in their conclusions and designing a system to ensure the tool’s warnings didn’t just lead providers to click past a pop-up, and instead translated to effective, real-world care.

The challenges they faced, and what it took to overcome them, underscores that AI’s success in medicine hinges as much on human effort and understanding as it does on the statistical accuracy of the algorithm itself.

When Lise Hamlin needed to see her nurse practitioner in the 2020 depths of the pandemic, she was initially thrilled to set up a telemedicine appointment to avoid the risk of covid exposure. Until she realized the virtual visit wouldn’t have captioning.

As a person with hearing loss, Hamlin lip-reads and uses captions to help understand video meetings. The resident of Germantown, Maryland, could barely follow along during the appointment. As director of public policy for the Hearing Loss Association of America, she was enraged. But she was hesitant to do much about it.

“You’re in the middle of a pandemic, how much do you want to alienate your doctor?” she asked.